David Einhorn (Trades, Portfolio) a well-known hedge fund manager and value investor is most famous for betting correctly with a short position in Lehman Brothers stocks before it collapsed during the 2007-2008 global financial crisis. Prior to this, in July 2007 at a public conference, he accused the investment bank Lehman Brothers of using dubious accounting practices in their financial filing, and in April 2008 Einhorn announced his Lehman short position, which turned out to be a huge win for Greenlight Capital. Einhorn is known for his critical thinking skills and contrarian bets which defy conventional thinking.

In an interview with Bloomberg earlier this week,
David Einhorn (Trades, Portfolio), said the world has moved on to passive investing or other strategies like quantitative or algorithmic investing. He also said classical value investing, which encompasses security analysis and the valuation of companies, might never be prominent again.

“I don’t know that it ever comes back,” the Greenlight Capital founder told Bloomberg Television on the sidelines of the Robin Hood Investors Conference in New York. Einhorn noted most value investors are being put out of business, citing serious changes to the market structure. “There’s just very few of us left,” he said, adding that most market participants these days are not trained or experienced in value investing, or have shifted to passive or quantitative investing.

As investment firms have transitioned to other strategies, he observed that the analyst teams who value securities have been gutted. The guru said he used to be able to buy a company at a reasonably low multiple and it would do somewhat better than the competition. Other investors would notice some time later and, as a result, would re-rate the shares to a higher multiple two or three years later and he would make 50% from the investment. That is not happening anymore as there is no one actively observing the operating improvement in the company.

Fewer players doing valuation means there is no one to notice what is happening with these companies and “nobody knows what anything is worth,” Einhorn said. “So there’s an enormous number of companies that are dramatically misvalued in ways that we haven’t seen before.”

The investor also said some of these companies are buying back huge amounts of their stock, so, eventually, investors will have to be paid by the company itself and not by the stock market.

The death of value investing has been bandied about in investing circles for quite some time now. I doubt value is as clear cut as in the past. For instance, during Benjamin Graham’s time, investors could rely on simple measures like the price-earnings ratio, earnings per share growth or dividends per share to value stocks. In fact, using these measures now will likely land you in a value trap. Markets nowadays are much more sophisticated as the market participants are armed with massive computing power, lots of readily available information and advanced tools (like GuruFocus.com), especially in deep markets like the U.S.

This idea is called the paradox of skill. As people become better at an activity, the difference between the best and the average and the best and the worst becomes much narrower. More and more highly skilled market participants are fishing more intensively in the markets than ever before. This means markets in developed countries with deep and sophisticated stock markets like the U.S., U.K. and Canada are getting more competitive and more efficient. A result of this is value investors may have to take their business to less developed stock markets (which have other problems like lack of transparency or inadequate reporting systems).

While Einhorn is correct that value investing in the classical sense is likely gone, value investing itself has evolved to become more complex. Concepts like first-mover advantage, growth, competitive moats, R&D, brands, globalization and total addressable market have to be incorporated into the value equation. Many of these concepts are qualitative in nature and cannot be reduced to a formula. Einhorn should know that. For example, how can you reduce the entrepreneurial genius of someone like Elon Musk into a formula (Einhorn spent much time & money unsuccessfully shorting Tesla Inc. (TSLA, Financial)).

Additionally, Einhorn mentioned companies may have to reward investors directly to realize value. This usually involves buying back stock. Stocks can become so cheap that it is more profitable for the company to buy its own stock than invest in growth or acquire another business. Looking at the guru’s portfolio, we can see an example of this with Brighthouse Financial Inc. (BHF, Financial), an insurance company which sells annuities.

Spun off of MetLife (MET, Financial) in 2017, Brighthouse is Einhorn’s second-largest position as of the second quarter. The company is definitely a value stock with a price-book ratio of 0.35. It is buying back stock hand over fist, lowering its shares outstanding from 122 million to 78 million over five years. 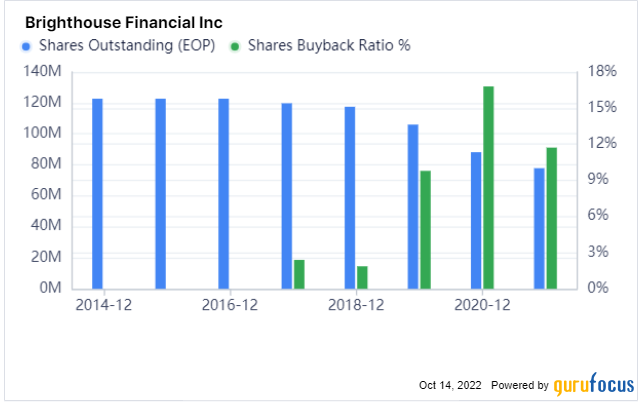 Dillards Inc. (DDS, Financial) is another company Einhorn was previously invested in which aggressively bought back its undervalued stock with outstanding results.

Value investing has certainly changed over the past decade as incorporating growth concepts into value has become increasingly important. The Graham-style, deep-value security analysis appears to be no longer working, at least in the U.S.

Paul Samuelson, the Nobel laureate from the Massachusetts Institute of Technology, recalled that John Maynard Keynes once was challenged for altering his position on some economic issue. “When my information changes,” he remembered Keynes had said, “I change my mind. What do you do?”

I think the facts surrounding value investing are changing. As such, we need to adjust our strategies on how to approach it.