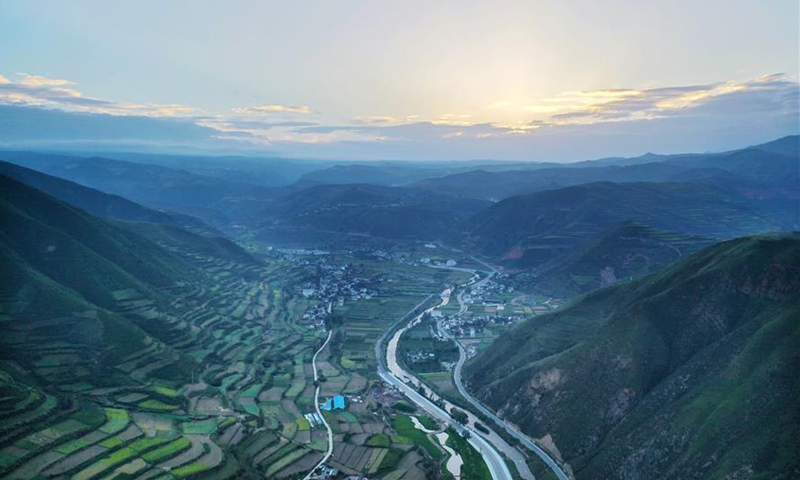 Aerial photo taken on Aug. 13, 2020 shows a view of Yeliguan scenic area in Lintan County of Gannan Tibetan Autonomous Prefecture, northwest China’s Gansu Province. Sitting on the border of Gansu, Qinghai and Sichuan provinces, Gannan serves as a major water conservation area for the Yellow River, the second-longest river in China. Featuring various landscapes and diverse cultures, it is an acclaimed attraction for both domestic and international tourists. (Xinhua/Xing Guangli)

China accelerated investment in water conservation projects this year, with a total investment of 921.1 billion yuan ($130 billion) in the first 10 months, a record high, the Xinhua News Agency reported on Sunday.

Work on 45 major projects has kicked off, with a total investment of 424.9 billion yuan. Some major facilities under construction have reached their interim goals.

For instance, the tunnel of the Pearl River Delta water resource allocation project was completed in October, which will be used for building 113.2 kilometers of pipelines that run 40 to 60 meters underground. It’s designed to deliver an average of 1.708 billion cubic meters of water annually, according to Xinhua.

The first unit of the Dateng Gorge water conservation project in South China’s Guangxi Zhuang Autonomous Region was completed and put into operation on November 1, two months ahead of schedule.

And, a new power generation capacity of 4.8 million kilowatt-hours per day was added to the project, offering strong support to local economic and social development.

Work on a number of projects relating to flood control, water conservation and food supply has been accelerated this year, and more than 3,500 reservoirs have been reinforced in the country.

More than 10,000 kilometers of small and medium-sized rivers were improved, and 12,298 rural water supply projects were renovated.

In 2021, China invested 757.6 billion yuan in water conservation projects, according to data released by the ministry.