In 2021, Black business founders raised $4.2 billion in venture capital. That’s 281% more than they received in 2020 — but only 1.3% of the total pie, meaning there’s still a long way to go when it comes to closing the funding gap for Black-led companies.

In October, Good Housekeeping‘s Tiffany Blackstone moderated a panel on venture capitalism as part of Hearst’s annual Celebrate Black Style Summit, a three-day streaming event highlighting influential Black voices in fashion, beauty, business and entertainment. For her discussion, Tiffany sat down with three Black startup founders to talk about their journeys to securing funds for their businesses and the lessons they learned along the way. The panelists were:

Read a highlighted excerpt from the panel below, where Tiffany and the panelists discuss connecting with investors when first pitching ideas. Scroll to the bottom to watch the entire discussion.

Tiffany Blackstone: You referenced pattern-matching where [investors] invest in people who are like them and who they recognize and sort of relate to. We know that the groups of investors don’t look like us. How do you relate to them in another way? Is there a way that you’ve found to jump over that hurdle and say, “Okay, well where else do we relate?”

Tye Caldwell: Well, I think it’s just about being authentic. I think what really shocked us is when [my wife and I] were in our first investor meeting in Silicon Valley, the investor said when we walked in, “Oh, I thought you guys were gonna be two white guys that were 6 foot.” That’s when we had to realize — because of our idea. They thought that because we had this idea, it was someone of our white counterpart.

And we understood it was going to be a “no,” [so then] what do we do? Do we walk out? Do we say something crazy? Do we be disrespectful? But at the end of the day, we were business people … we’re long in the tooth. We know how to not just behave as founders but we knew how to rebound from that, and I think once we ended that conversation, word got around in that small community that ShearShare was out there. We’re from the industry. We represented what we’re building, and I think that’s what helped us.

TB: Morgan and Carmella, tell us a little bit about your experiences. You were both already in the tech industries and in financial services … Was it easier for you? Did you know what to expect going in when you were raising capital for your companies? Did that help you?

Morgan Hewett: Well, I think that Tye hit it on the head that investors have to find something that they can relate to. When we first started our company it was actually very difficult for my co-hire and I to share our origin story because it was deeply personal. I wouldn’t want to cry when I was telling that story, but I learned that I had to wear my heart on my sleeve because all of our first initial investors invested in it because my family member’s story was their sister’s story, their cousin’s story or their best friend’s story. There are so many people in this country that, unfortunately, are touched by mental illness, by suicide, by things like that. That’s what got the first set of investors over the hump … those first checks are the hardest ones, and then once you have people who are good behind you, it’s great. For us, Hearst opened up a lot of doors once we had Hearst backing us.

Carmelle Cadet: So, I had the experience working in corporate for a few years being the investor in the “big company.” But it is very different being the founder and a startup in the market. Part of it is, of course, learning how an investor thinks, and I think V.C. in general is different from taking a loan at the bank or angel investment, even friends and family. It’s very different. If you’re lucky enough to have a family member to invest or to have enough funds to do that, sometimes they just assume they’re giving you the money and you’re going to lose it. They just trust you and they love you. [But venture capitalists] do expect you … to deliver and that’s the name of the game.

It took me a while to understand that new world. I was fortunate enough to bootstrap the company. It was a one-woman show at first, and I convinced my husband to take half of our 401K as well and said, “Trust me, honey. I am going to figure out a way for us to close the gap here.” And eventually, I did that … I was fortunate enough to find an accelerator program and [our] first investor, who was a Black investor at 500 and brought us into the accelerator … That opened up my eyes to the power of networks. For me, going through the experience, the moment you get someone to say “yes,” they can open new doors. And taking advantage of that and understanding the rules of the game is important. There are a lot of ideas, and I realize that V.C.s get so much coming at them that for you to stand out and for you to demand the time to explain what the idea is, you have to have something compelling that’s going to meet certain boxes.

Watch the entire discussion below: 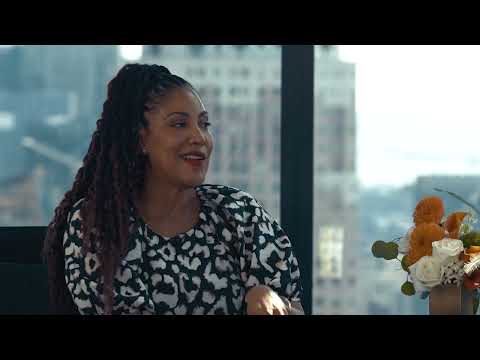