Having proven that it can grow through an economic downturn, the road ahead looks smooth for litigation finance: The practice will continue to grow among law firms and corporations as the legal profession continues to grow accustomed to this financial tool.

But as their industry grows, litigation funders will have to get comfortable with at times disclosing their deals—which are normally kept confidential—because circumstances requiring mandatory disclosure also appear poised to expand.

Litigation finance faced some initial skepticism in its early days, but the industry, which is particularly nascent in the US, seems to be getting past initial growing pains and settling in to the place it has carved out for itself in the national legal market.

Results from Bloomberg Law’s 2022 Litigation Finance Survey suggest that litigation finance is getting and staying comfortable as a minor, but steady, legal industry presence. Speaking to the question of reliable growth, three-quarters of litigation funders surveyed said their business has increased since this time last year.

Survey results also indicate a steady pattern of interest and acceptance among law firms in recent years. While just over 10% of firm lawyers surveyed say they have used or are interested in using litigation finance, about one-third of those say they are more likely now than they were one year ago to seek financing. What’s more, about two-thirds are more likely to seek financing now than they were five years ago. And the forward-looking picture is good for the industry as well: Of the lawyers who have used litigation finance, about three-quarters say they are likely to use it again.

Economy Not a Problem

While the turbulent economy of the past few years could have spelled trouble for other fledgling industries, litigation finance appears to be continuing to gain ground in spite of—or perhaps partly because of—the economy.

Working in its favor, litigation finance enjoys the rare characteristic of being an asset class that’s uncorrelated to the market: The odds of winning a lawsuit generally have nothing to do with how the stock market is performing. This makes it an attractive investment option, particularly during an economic downturn. According to the litigation finance survey results, about a third of funders expect to raise more capital if a downturn or recession occurs in the next year. 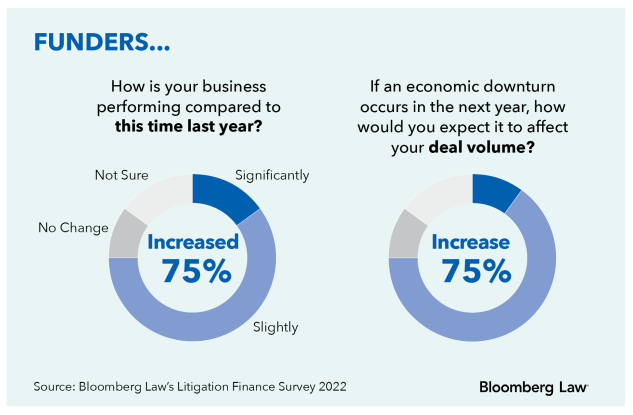 The value of, and the idea of requiring, disclosure of litigation finance deals to opposing litigants in a case has long been a point of contention in the industry. Still, there continues to be a push among some industry watchers towards disclosure, and signs point to more, not less, disclosure in the future.

A federal district courtroom this year joined the handful of courts where disclosure of funding is mandatory. Chief Judge Colm Connolly of the District Court of Delaware issued a standing order in April requiring the disclosure of litigation finance arrangements within 30 days of the filing of an initial pleading.

There also continues to be a push to address the issue at a nationwide level through federal court rules or through legislation. Lawyers for Civil Justice has filed requests with the Advisory Committee on Appellate Rules as well the Advisory Committee on Civil Rules asking both to consider rule amendments that would mandate or encourage disclosure of financing arrangements. And the Government Accountability Office continues to study the industry at the request of lawmakers who favor regulating disclosure of funding.

And regardless of the slow pace of the potentially developing disclosure rules trend, survey results show that disclosure of funding arrangements is in fact becoming more common in actual practice. When asked how frequently their funding arrangements are disclosed in court, compared with last year’s results, notably fewer lawyers and funders said their arrangements were never disclosed. In fact, less than 10% of funders said never, compared with nearly 30% last year. More than three-quarters of funders said that their deals are now either rarely or sometimes disclosed.

If you’re reading this on the Bloomberg Terminal, please run BLAW OUT <GO> in order to access the hyperlinked content, or click here to view the web version of this article.