The chief executive of a London-listed oil and gas company recently threatened by Hizbollah has called for more investment in the energy potential of the eastern Mediterranean after a landmark maritime deal between Lebanon and Israel.

Mathios Rigas, whose Energean delivered the first gas from Israel’s Karish field last month, said the US-brokered agreement, following years of on-off negotiations between the sworn enemies, offered a “new model” for the resolution of border disputes in the contested region.

The deal does not constitute a peace agreement between the two countries, which still do not recognise each other’s governments, but allows for the exploitation of the area’s hydrocarbons while border negotiations continue.

“[It] presents a new model of how countries that are in dispute can find a way . . . to allow economic development, economic interests, without solving everything,” Rigas told the Financial Times.

Rigas, a Greek national who grew up watching his own country’s border dispute with Turkey, said the deal should encourage more exploration activity in the eastern Mediterranean to make the region a “stable supplier of energy” into the EU. “I think there is a lot more gas to be found,” he said.

Energean is a relative minnow in the oil and gas industry. The explorer, with operations in Israel, Greece, Italy and Egypt, is worth about $3bn after its shares rallied 74 per cent this year. But it has played an outsized role in recent events in the eastern Mediterranean.

In July, Israel shot down three Hizbollah reconnaissance drones heading for Energean’s floating production facility after it arrived at the disputed Karish gasfield in what Lebanon’s president had called “a hostile act”.

Days later, amid continued threats from Hizbollah of more serious attacks, Rigas flew to the facility himself to reassure staff that it was safe to continue work. “I stayed for two or three days,” he said. “The public statements made by the state of Israel gave everybody and me the comfort that I needed.”

Ultimately, US pressure, channelled through US envoy Amos Hochstein, was key to achieving a breakthrough. The final deal was composed of separate agreements with the US, signed by Israeli and Lebanese leaders in their respective countries.

But it was Energean’s commitment to deliver first gas from the field that appears to have added impetus to the faltering talks.

“I think we brought with our project a catalyst, because it was a hard deadline,” Rigas said. “Karish is starting to produce so these two enemies had a reason to come together.”

Karish, with approximately 2tn cubic feet of gas reserves, is small compared with Israel’s other Chevron-operated fields, Leviathan and Tamar, but is already providing additional gas for the Israeli economy. 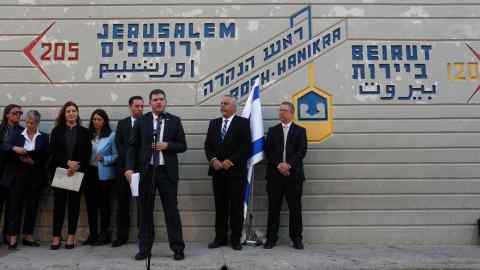 The border agreement also recognises Lebanon’s rights over part of the prospective Qana field, which could generate much-needed future revenue for its cash-strapped government in Beirut. A consortium led by Total Energies is expected to commence exploration work soon.

“Most importantly, our deal allows Lebanon to develop its own resources,” said Rigas, who wants to see gas reserves in the eastern Mediterranean developed first for local markets. “Before we start to talk about exports of gas from the east Med to Europe, we have to think how we’re going to supply the region that needs this resource.”

The east Mediterranean, including Israel, Egypt and Jordan, already consumes as much as 100bn cubic metres a year of gas, equivalent to Germany, and is growing, he said.

However, in Europe, pressure to reduce dependence on Russian energy has revived interest in a long-discussed €6bn eastern Mediterranean pipeline to bring gas from Israel, Egypt and future discoveries into the EU.

“If you’re asking me if, financially, the project works today, maybe it’s challenging,” Rigas said. “But then I’ll turn the question around: what is the price of being independent from Russia?”